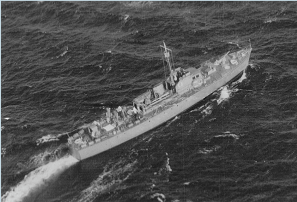 
J & K        Engine room of ML472.
L                Was obtained from Geofrey Hudson the Coastal Forces historian. You can see on
this photo and on some of the others the launching tubes for the Hedgehog in
front of the wheelhouse.My father remembers someone also having to remove all
light bulbs as they tended to shatter when it was fired.

By chance no one had thought of the effect on an ML of attacking a shallow target, only 20-30ft deep, with hedgehog bombs - which explode on contact. A technique had been worked out, by eye and stopwatch, without using asdic.

Commodore Stephenson, who had seen the report, leapt at the error and told Fairlie that he intended to find out, and that he would organise it. The charts were examined to find a flat rock area at a depth of 20ft or so, the nearest being south of Canna Island.
On a hot summer's day, 472 set off with Q 453 as safety vessel and observer. On arrival, several lines of armed lead soundings were made to confirm the data on the chart. The bottom was rock and kept clear by sluicing tidal streams, and a dan buoy was laid in position to simulate the spot where the target was to be. This buoy attracted a small gaggle of ducks on the glassy water. As the boat, travelling at close on 20 knots, roared up, the ducks were still swimming around, but as the hedgehog fired and the projectiles soared upwards, the now terrified ducks flew off as the cascading V of bombs came down . . . all except one duck, which dived. There was a hell of a bang as the bombs hit the bottom, half a cable ahead. The lower deck had been cleared earlier, but everyone was shaken up severely. Then ... up in the air, turning over and over, went the poor old duck. The ML had passed the test and a boat was dropped to recover the dan, and the duck. It was discovered that, apart from a tuft of feathers round the Parson's Nose, the bird was completely bald and very seriously dead.